Well, you may think that it should be done with some polices like:

match destiantion address any
then reject

>The result of this policy - you won't be able to ping external hosts (public IPs) but you can ping your local hosts in vlan. This can not be accomplished via policies btw since the PCs are in the same vlan.

The result of this firewall filter - you won't be able to ping external hosts (public IPs) but you can ping your local hosts in vlan. Hosts ARP within the same broadcast domain knows each others MAC addresses and negotiates directly using only L2 infrastructure thus this traffic may even never hit router vlan logical or even physical interface and firewall policies doesn't work in this scenario.

does not achieve the assigned task.

Thereby this task can not be carried out on SRX 210. Special thanx for this solutions to JNET Forum Community that helped me to discuss this issue.
Block ICMP on Juniper SRX 210 juniper ping block Juniper SRX icmp block juniper srx ping block

Popular posts from this blog

August 08, 2017
You discover that your Junos EX or SRX device does not complete normal boot up. The image seems to be corrupted for some reason, such as a continuous power failure. If this occurs, don’t worry, you can get it back up within few minutes using the USB port. Step 1. Get a USB flash drive. Copy the Junos image to the USB drive (without creating folders). Use FAT file format if the USB size is less than 2 GB. Use FAT32 if the USB size is greater than or equal to 4 GB. The example below uses the file image junos-srxsme-10.4R1.9-domestic .tgz. Step 2. Insert the flash into an EX/SRX USB port. Step 3. Reboot the device. When Junos boots up, you will see the message : Press Space to abort autoboot Do nothing. A little while later, you will see: Hit [Enter] to boot immediately, or space bar for command prompt. Press the space bar. You will be at loader mode; the prompt should be loader>. If the prompt is > , type >boot to make it loader>. Step 4. Now type the following command: lo
Read more 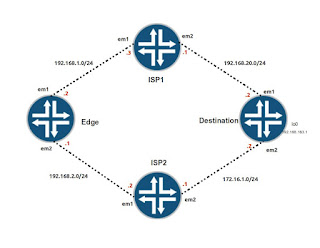